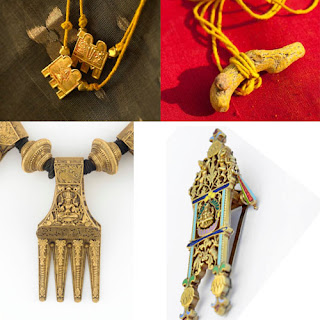 
Before the 10th or 11th century women wore a kungumam on their forehead and men wore rings on the toe.

In the 11th century, the poet Katchiyappa Sivachariar mentioned thaali for the first time in his book Kanthapuram. Later, in 12th-century poetry, Seikizhar and Kamban mentioned about thirumangalyam in the historical book Periyapuranam. Since then, the thaali ceremony was believed to have come into practice 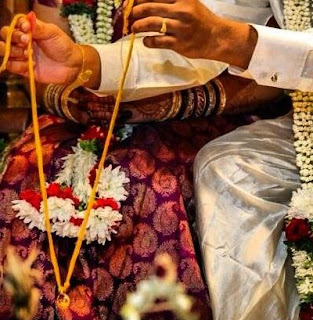 Thirumangalyam’ in South India, it is known as the Mangalsutra in the North. It is usually a necklace with black beads strung from a black or yellow thread prepared with turmeric.
Gold marriage pendant from South India, called “Thali”, worn by women in Tamil Nadu and Kerala. This kind of pendants are not massive, they usually have a lac core. The thaali includes gold coins, gold roundels, corals, and bottu. They may also include motifs like the moon, sun, Shiva lingam, Goddess Meenakshi, Thulasi, etc. as part of the design

The followers of Shiva have 3 horizontal lines and the followers of Vishnu have 3 vertical lines in their thali design.  However, the introduction of the caste system divided the design for the thali in Southern India

The gold represents Goddess Parvati and the black beads which hold the gold symbolizes Lord Shiva. As gold is a symbol of prosperity and well-being, a women wearing a mangalsutra is believed to bring happiness and prosperity to the family 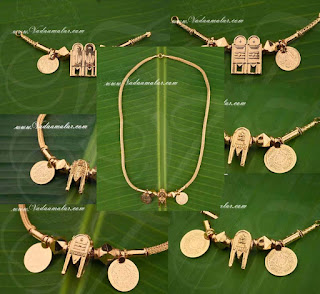 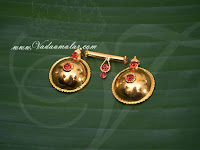 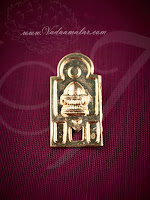 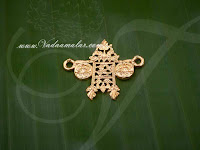 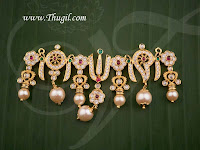 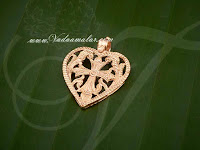 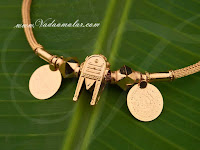 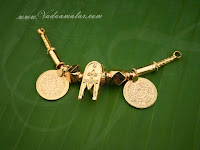